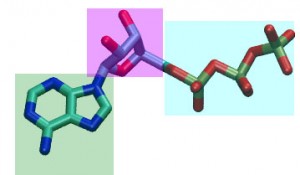 Adenosine Triphosphate (ATP) this molecule is composed of an adenine (green) connected to a ribose (purple) connected to three phosphate groups (blue).

One of the biggest responsibilities of the cell is regulating what goes in and out of it. This task is of varying difficulty based on the environment or state of the cell. If a substrate needs to be transported out of the cell and there is a low concentration of the substrate outside of the cell, then there is a concentration gradient that can be taken advantage of to this effect. That being said, there are numerous times when the cell needs to transport substrates actively. In order to this, all living things utilize proteins from the superfamily of proteins called the ABC transporters. “ABC” in this case stands for ATP-binding Cassette. The molecule ATP is constantly used as a source of energy within the cell.

All ABC transporters are constructed of four domains. Two Nucleotide binding domains (NBDs) that are responsible for binding and hydrolyzing ATP. The energy from binding and hydrolysis is translated to the two Transmembrane domains (TMDs) of the transporter. The TMDs are responsible for binding the substrate of the Transporter and upon signaling change their conformation (inward-facing↔outward-facing) to move the substrate across the membrane. These transporters can be either importers or exporters. 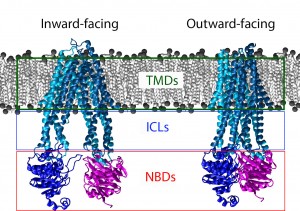 A schematic of an ABC transporter inserted into a lipid bilayer. The Nucleotide Binding domains are clearly de-dimerized in the inward-facing state. In the outward facing state the protein has bound ATP and the corresponding movement in the TMDs has occurred. The Nucleotide binding domains are boxed in red, the intracellular loops in blue, and the Transmembrane domains in green.

While there is an abundance of interesting ABC transporters that are responsible for such things as multi-drug resistance in bacteria, our research has been focused on the enigmatic CFTR protein. CFTR stands for cystic fibrosis transmembrane conductance regulator. Mutations in this protein cause the disease Cystic Fibrosis. CFTR is the only ABC transporter that has evolved to operate as a chloride pore instead of actively transporting a substrate. This unique property has allowed CFTR to be studied by numerous electrophysiological experiments. A high-resolution crystal structure of CFTR has yet been found, in order to study CFTR’s structure many groups have turned to homology modeling.

The homology model we utilize for our simulations was created by our collaborators within the Nael McCarty group at Emory University Atlanta, GA. They created two models of CFTR, one in an open state and the other in the closed state of the pore. They ran small MD simulations and confirmed residue contacts they observed in the simulations experimentally. 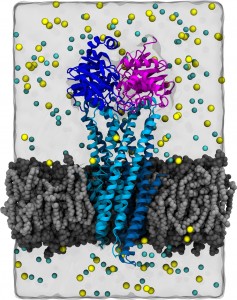 Our simulations of this model have been of a longer time scale and performed at equilibrium conditions. We aim to discover the differences within ATP-binding and energy signaling within CFTR that give it the unique property of pore formation. We plan on running similar simulations on related ABC transporters to quantify these unique properties in the context of more “canonical” ABC transporters.

A small movie showing how the NBDs of CFTR move in simulation.