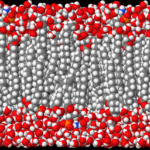 Cellular membranes are made up of phospholipids, proteins, and other lipids and carbohydrates. This module focuses on the phospholipid component of these membranes. Phospholipids have unique properties over other molecules, for example having both a hydrophobic and hydrophilic region which drives the self formation. It also allows for the partial penetration by only some molecules, depending on their  properties, which is talked more in depth within this module.

Life needs a constant energy source to function, and all of life uses Adenosine Triphosphate, a molecule that contains a ribose, adenine, and three phosphorus atoms, to temporarily store and transport energy in the form of chemical energy. This molecule does this by storing it in its phosphorus bonds, which when broken during a hydrolysis reaction gives the energy needed to create new molecules, transport molecules across cell membranes, release heat to maintain body temperature, etc. In this module, we show the structure of ATP and its hydrolysis.

Producers, like plants, are able to produce their own energy to power their cells by using energy from the sun in a process called photosynthesis. Photosynthesis in plants is done in a organelle called the chloroplast which houses proteins like the light harvesting complex which is responsible for capturing photons from light to be used to transform its energy into chemical energy later in this process. This module dives into the structure and different properties with the LH2 protein to highlight its importance so we can better understand the process that is responsible for most of life on earth. 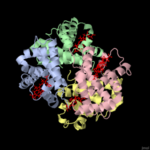 Hemoglobin is responsible for getting the oxygen you breathe into your lungs to all the cells in your body in order for them to be used in aerobic respiration. Hemoglobin accomplishes this by having an oxygen molecule bind to an iron at the active “heme” site of each of the four chains in the hemoglobin structure for transport around the body. 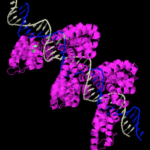 Tal effectors are proteins made by Xanthomonas bacteria that bind to plant DNA. They activate the expression of specific genes in the plant that are beneficial to the bacteria. A short simulation of an effector bound to DNA illustrates this unusual interaction.

This material is based upon work supported by the National Science Foundation under grant no. MCB-1452464.