What can I do with a degree in Physics?

The trivial answer is “anything!” And while true, it doesn’t mean the path is straightforward. A BS in Physics is rarely an end in itself (see “Where do GT physics grads go?” below). However, it provides a strong foundation for a multitude of options afterwards. But what can a physics student do to compete with engineers and other professionally trained students?  First, realize that many of the skills learned in physics translate to professional careers!  But it’s not always apparent to recruiters and HR people, meaning that a physics student has to learn how to market themselves outside of the classroom.

The most important thing to realize that you will have to do some work outside of the classroom to figure out what comes next.  No one is going to just hand you a job. But here’s how you can get started…

First, breathe!  Try watching this SPS webinar: I’m About to Graduate – What on Earth Do I Do Now?

Next, take advantage of Georgia Tech’s amazing Career Center resources and staff: http://career.gatech.edu/.  They will help you craft a resume, find opportunities, and even explore possible career paths.  They also have a GT-specific job board that has opportunities only for GT students called Career Buzz.

Craft a top-notch resume: It should highlight the things you learn as a physicist that most people don’t know.  In talking with many employers, they know what most engineers can do through years of experience hiring them, but they don’t know that physicists have many of the same abilities!  On your resume, emphasize skills and projects, not classes.  No one cares that you took “Computational Physics” but they will care that you learned Python.  If you can demonstrate this through examples (projects) even better!  Don’t use (too much) physics jargon!  Here are examples of resumes and cover letters from Career Services.

Make a linkedIn profile: Nearly all (at least 90%) of recruiters use it.  You can find numerous resources about how to craft a good one; here’s one from Society of Physics Students.

Do an internship: Nothing says you’re prepared for a job better than experience. Georgia Tech has an internship fair in January. The national labs also have great internship programs, although often (always?) only for citizens. Here are a FEW examples:

Go to a career fair: Even if you don’t think that you will get much interest, it’s a good experience to know how to talk to recruiters and what things they are looking for.  Look at five common mistakes and five ways to make the most of it.

Join a group on campus focused on your desired career path:  Want to do consulting?  Join the GT Undergrad Consulting Club!  Want to do IT?  Join the Management Informational Systems Club!  Want to play games for the rest of your life?  There’s a club for that!  Find these and more here.

If you don’t have a career path in mind yet (which is fine!), start investigating your options.  SPS has a number of great resources, including a Careers Toolbox. And always feel free to approach the faculty to discuss ideas and options. We are here to help!

Where do GT physics graduates go?
The American Institute of Physics compiles details statistics on numerous aspects of post-graduation employment. But what about GT graduates? After receiving their BS in Physics from GT, unsurprisingly, roughly 75% of them continue their education in graduate school. However, what may be surprising is that only 40% of those are in Physics! The other 60% that continue their education go into fields such as engineering, medicine, law, and education.

Because school can’t last forever (unless if you become a professor!), it’s useful to look at what kinds of jobs graduates end up in. The chart below shows where students that received a BS in 2000 or later ultimately landed. Almost half are in industry, and nearly as many in education. “Government” includes engineers and scientists in the military and national labs, while “healthcare” includes medical doctors, radiation technicians, and others. And although non-STEM jobs, e.g., consulting and finance, are low, this number rises the further back we look (up to 10%), showing that the career you start in is not always the one you end in. 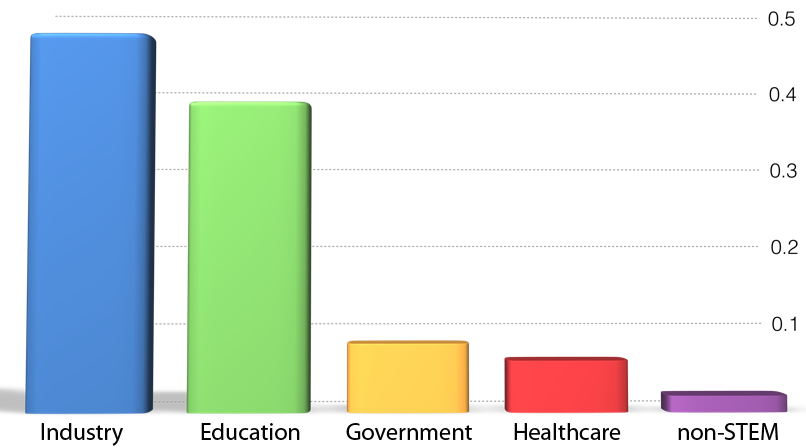